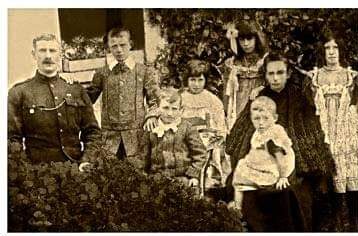 James (Seamus) McDonnell (RIC), his wife Anastasia and children at their home in Murgasty, Co. Tipperary.

In July 2022, Anna O Laoghaire took part in a Poetry as Commemoration workshop at the Lexicon Library, Dun Laoghaire. In this blogpost, Anna details the inspiration behind her poem ‘Sentinels’.

My great-grandfather, James Mc Donnell, was killed in the Soloheadbeg Ambush on 21st January 1919. Known as Seamus in his family, he was a native Irish speaker from a small farming background in Mayo. He joined the RIC in 1882 and was stationed in Tipperary in 1891 after his marriage to Anastasia (nee Doyle) from Wicklow.  All of their seven living children were born and reared in Tipperary, mainly the town. Anastasia died in 1917.

The Soloheadbeg Ambush is considered the start of the War of Independence and controversy about the ambush persists to this day.  Those involved gave conflicting accounts as to whether the killing of the RIC men was pre-planned.  Some said the plan was to seek surrender of the RIC weapons and seize the gelignite which was under escort. Others said that they had a plan to kill the RIC constables all along — to up the ante in the fight for Irish freedom.  It was alleged that the RIC men had gone for their weapons first. The inquest showed that James was shot in the side of the chest and the back of the head.

My grandmother Elizabeth was the second eldest child and 24 at the time of the shooting. The youngest, my grand-uncle Alphonsus, was 11. My grandmother told me that the family had tried to stay on in Tipperary but a boycott ordered by the Irish Volunteers/ IRA of all RIC families and associates meant that the family were ostracised. Younger family members moved to live with relatives in other counties, and the rest moved and stayed away. They were bereaved and devastated by this violent death which had a lifelong effect on all the children and their direct descendants, including myself.

100 years after his death to the day, I visited Tipperary with four other great grandchildren.  I had a chance encounter with a woman at the Heritage Centre, who told me that she and some others had gone up to James’ grave and laid a wreath at the exact time of his death. I was deeply moved by this gesture of respect.

The Poetry as Commemoration project prompted me to revisit this family tragedy and my feelings around it.  I wondered how local people in Tipperary, neighbours, friends, and the wider community behaved during this awful time. Surely, they could not have totally shunned the family?  The Poetry as Commemoration project gave me an opportunity to explore this.  In my Poem ‘Sentinels’ I pose the question ‘Was there a kindness shown?’

For me it became about more than just one poem. I had to unpack buried feelings and issues which I had not confronted before. The writing process was personal, painful, cathartic and in some ways therapeutic.  I truly lived the experience of ‘Poetry as Commemoration.’